I've been warned that there are damp problems in the unoccupied house at 9-11-11.  The owner (a builder) of the neighbouring property which is also partly below ground at the back, has told me that he only uses the ground floor as a store and has extended upstairs to make a reasonable sized property.  I can also see from the inside that there are damp problems, but having faced similar issues at my former home, I feel confident that I can get the better of it !! 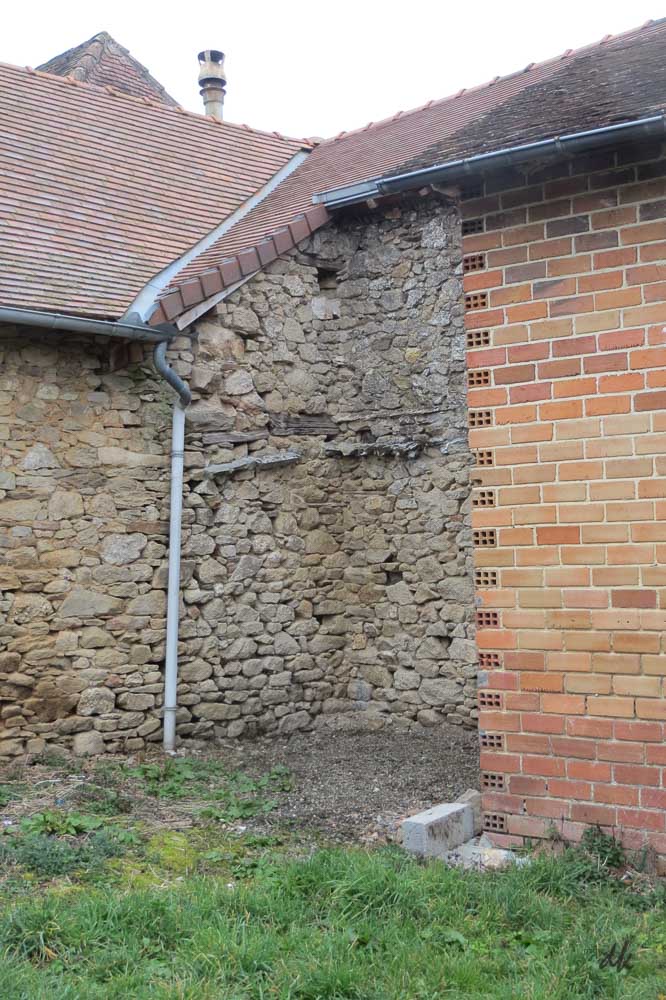 This last week we have had torrential rain, more than a months worth in 5 days with over 50mm one day.  Needless to say, there was a little puddle (perhaps a cup full) in one corner of the ground floor - an ideal opportunity to see where it's getting in (base of the back wall) and why (not sure yet).   During the heavy rain I observed the gutters and surface drains and it is clear they were not coping at all.  There was a veritable lake up against the back wall above ground, around 5cm deep at one time and water was overflowing from the tops of the guttering down pipes both from the house itself, but also from one side of the neighbouring property which drains into this property's garden. Probably not the whole problem, but at least part of it !  The resulting lake also makes clear that the land is not quite level, it slopes down towards the house - another potential contributor in the event of very heavy rain and surface run off.

During a lull in the continuing downpours today, I checked the rainwater drain that heads off down the hill to the street via a gap in the buildings : all flowing fine, so any blockage must be upstream - and so it was, a totally blocked inspection chamber with no cover, all hidden under the weeds and with brambles growing out of it so convincingly that I hadnt even realised it was an inspection chamber.  One side of the house roof and all of one side of the  neighbour's huge roof feeds into it.  Now unblocked and fitted with a temporary cover : we shall see what difference it makes.

After several periods of VERY heavy rain there is no further sign of water getting in and the place does not smell damp any more.  The old plasterboard cladding that was soaked through is still a bit damp but seems to be drying out.

Time to complete the stripping out of the old lining and let the walls breathe.

Much clearing and general maintenance of the garden area.  This has revealed more problems with the state of the surface water drains etc., so these have been repaired and we watch for further water ingress problems - so far so good.

In the meantime I refitted the BBQ in the main house courtyard and noted that the chimney has no cover, so allowing rain to fall straight down into the BBQ all through the winter - not good for a metal structure.  Decided therefore to fix the chimney which is accessible from the garden of 9-11-11.

Because it was so p****d I tried to straighten things a bit by tapering the mortar - I'm a rotten bricklayer at the best of times, but this was really tricky, especially as, working from the top, there was no real access to the front except by leaning out over the 5m drop ! The top was made by casting a concrete slab 80 x 60 x 4cm thick with a reinforcing mesh. Made a mould in chipboard, lined it with alli foil, positioned the mesh on wire legs, poured the concrete then vibrated it like mad with the help of an SDS drill. Found that sheer friction stopped the mould from moving much when vibrated, so put some dowel rollers under it - much better.

Yesterday I put the top on. It is surprisingly difficult to lift 48kg (calculated based on density of 2.4) above your head when balanced on a narrow wall above a 5m drop, then place it cleanly and squarely on four spacer bricks without knocking them over. I ended up putting some offcuts of joists across the top of the chimney between the spacer bricks, dumping the 48kg top on them, then used wedges to raise, centre and level it and finally packed fairly dry mortar into the gap between the top and the bricks. I'm sure a professional could do a lot better, but it's up there and its solid !

My back on the other hand does not feel too good this morning...

Hope to find a way to get easier access to tidy up the pointing.

Made a start on the drawings and specifications for the planning application.  Because this property is in a conservation area around the "historic monument" classed Ladignac church, everything that is visible from the exterior has to have detailed approval.  Strictly speaking, you cant even repaint a window or door without an OK from the powers that be.

Ironically, this has the opposite effect to that intended (happens to a lot of legislation I fear).  Because it's so tedious to get approvals and sometimes the authority insists on very expensive hand made materials for example, people simply dont maintain the outside of propeties in these classified areas !  Any work has to be approved, but doing nothing is OK !  The rules are intended to keep the authentic look of village centers and preserve interesting buildings - what acually happens is that the classified areas gradually deteriorate (some buildings are even abandoned) until they look like slums.

I refuse to play that game, I will fight my corner for an OK to restore the building, but at reasonable cost  - I can always threaten to simply cancel the exterior work if all else fails.  In fact, experience with the authority on approval for work on my main house has been quite good, we compromised on one or two points and what they really insisted upon seemed quite reasonable to me.