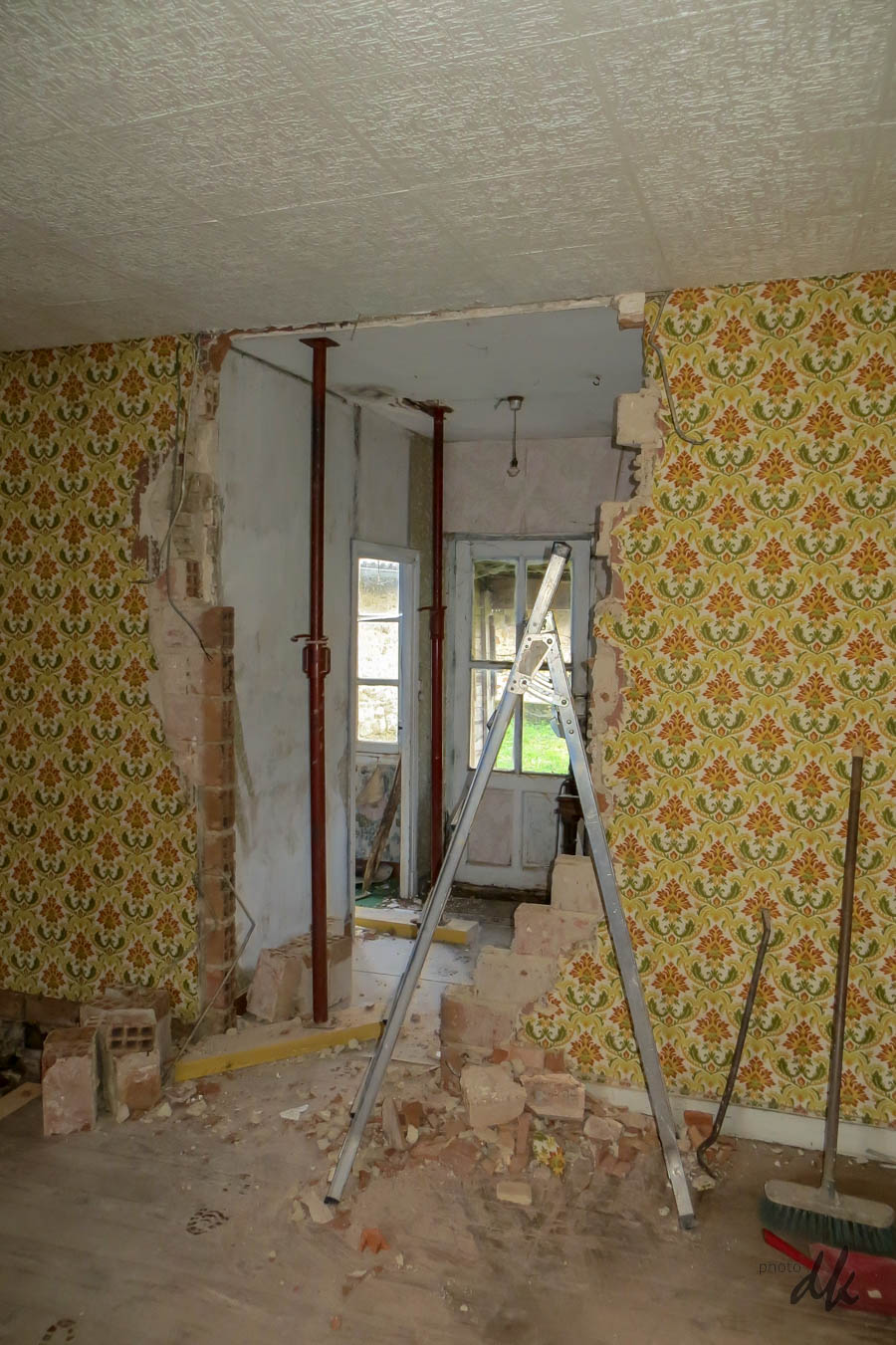 More activity ! I've started to demolish the dividing wall that will allow me to bring the space occupied by the old stairs into the main living area.

The structure of the floor of the attic above (this is the first floor remember) is a bit strange, there is one big beam in the middle at right angles to this dividing wall and theoretically partly resting on it, then all the joists run parallel to the dividing wall T'd into this one beam that runs the other way. The two ACROs (sited above proper walls on the ground floor) are reinforcing it (it's mainly supported by the outside walls front and back) until I can clear enough space to fit a big joist in place of the wall.

Other very strange practices elsewhere : the white dividing wall on the left of the photo is also in brick, but is built directly onto the floor boards which are sitting on nothing more than a modest size joist. The corresponding wall on the ground floor is 50cm further over (where the ACROs are). Looks a bit wobbly to me, a lot of weight for a simple joist, I'm glad it's part of the plan to take it out. This corner will be the open(ish) plan kitchen.

PS The new stairs are now protected with 6mm MDF pinned on with 15mm pins from a staple gun. 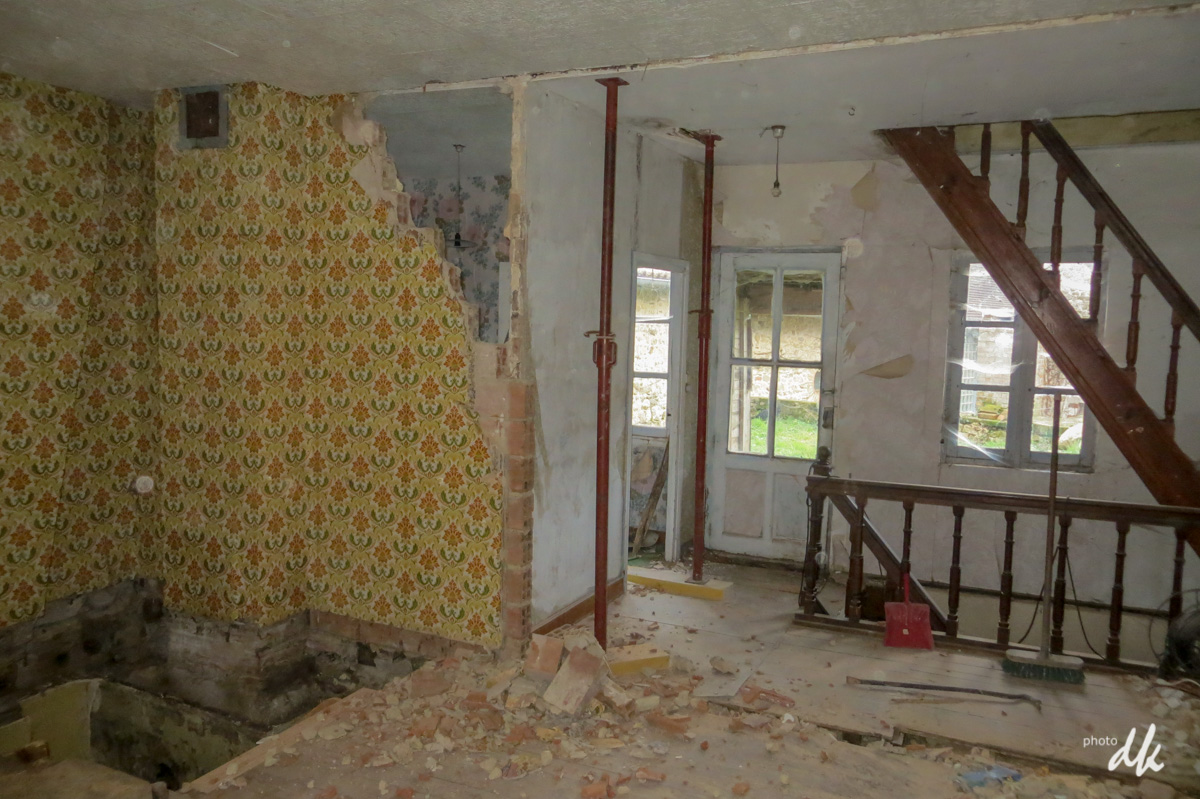 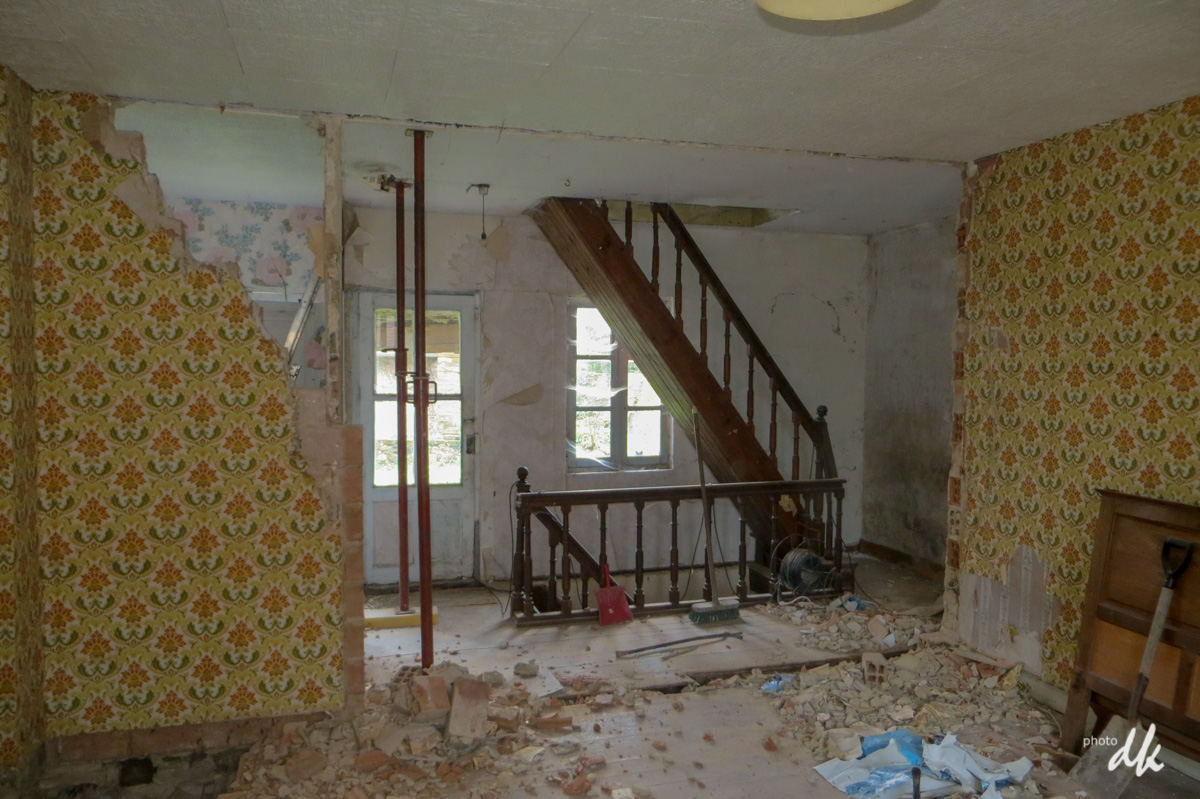 Another couple of afternoons spent whacking a cold chisel with a big hammer !!
My hands are too tired to do any more today, but most of the wall is down and 2/3 of the rubble removed.

The little dividing wall at right angles is quite beyond my comprehension... It turns out to be built using bricks just 2.5cm thick, stood on edge, then rendered both sides. How anyone could lay bricks up to 2.4m high only 2.5cm thick is a mystery to me. Seems like an impossible task, but there it is, perfectly upright too and quite solid with the cement render. 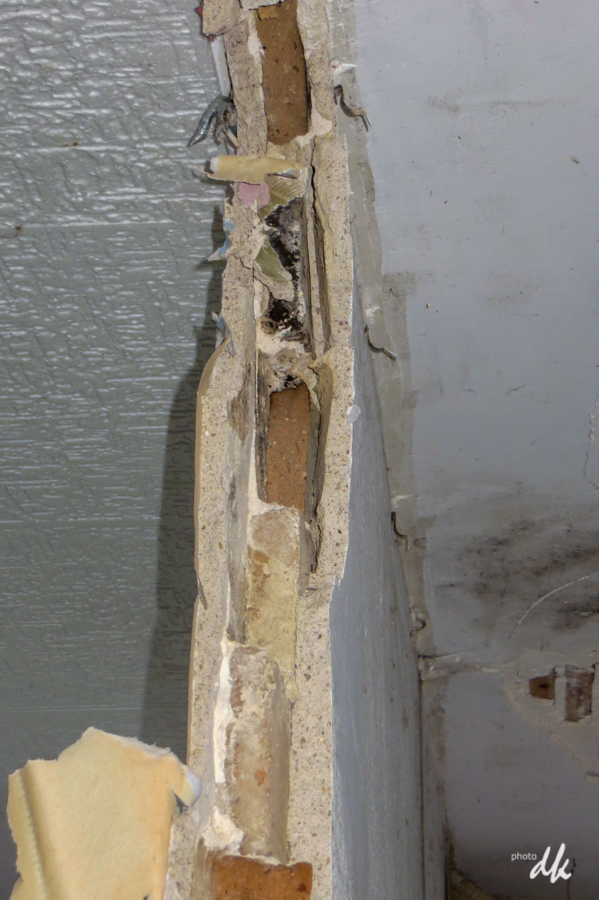 Here it is with the top of the ACRO for reference. 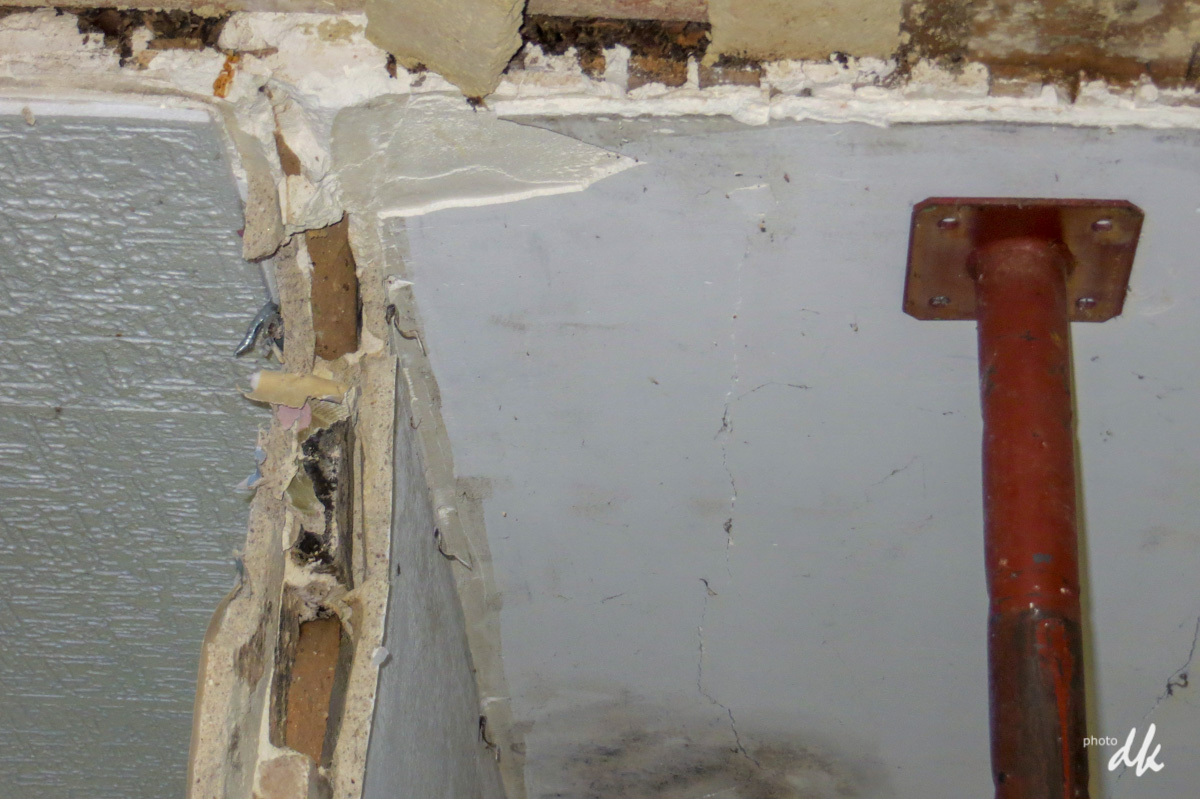 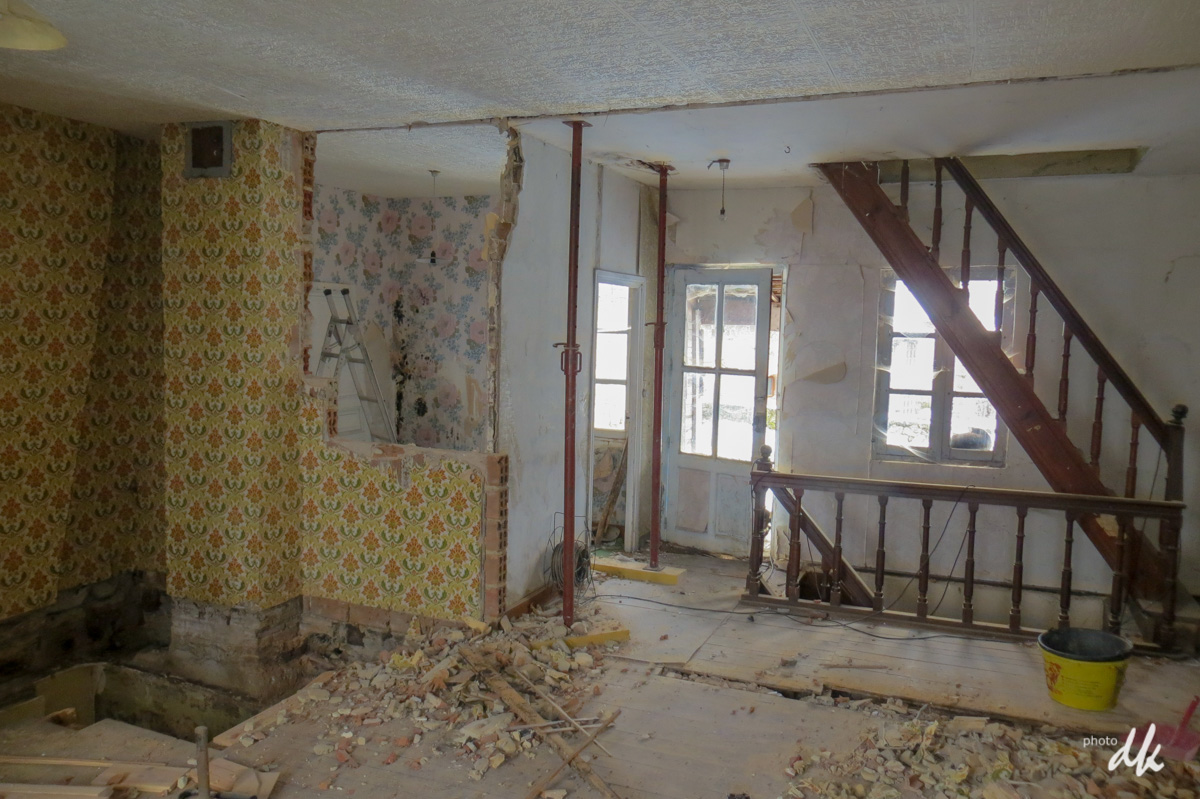 More of the same - most of the rest of the demolition completed, just the little white partition to go. The white partition is down, the rubble removed and I'm measuring up for joists etc ! 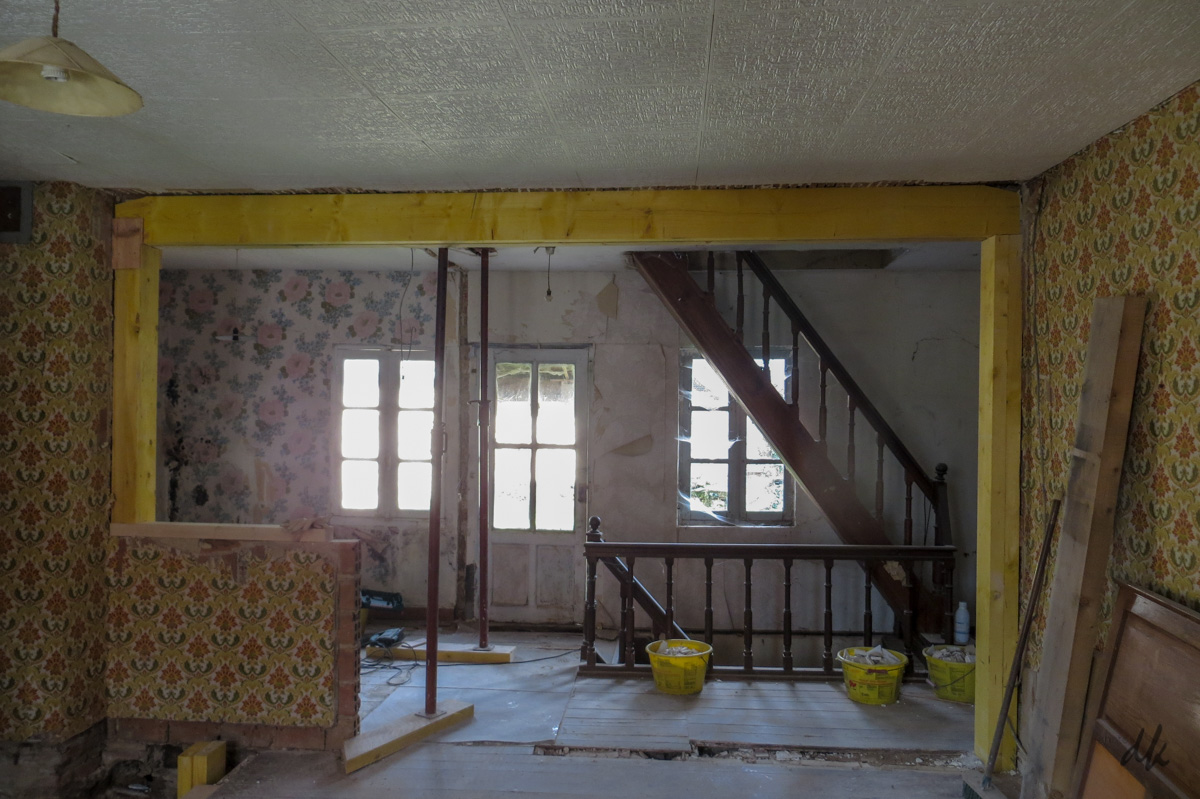 The support for the attic floor is fitted at last !

Another big step this week - I've removed the old staircase, fitted new joists and chipboard floor panels. Just the last bit of the top of the old stairs to the attic to be removed, couldn't finish it before as there was no-where to put a ladder over the void, now that the floor is in I can access it and tidy up. 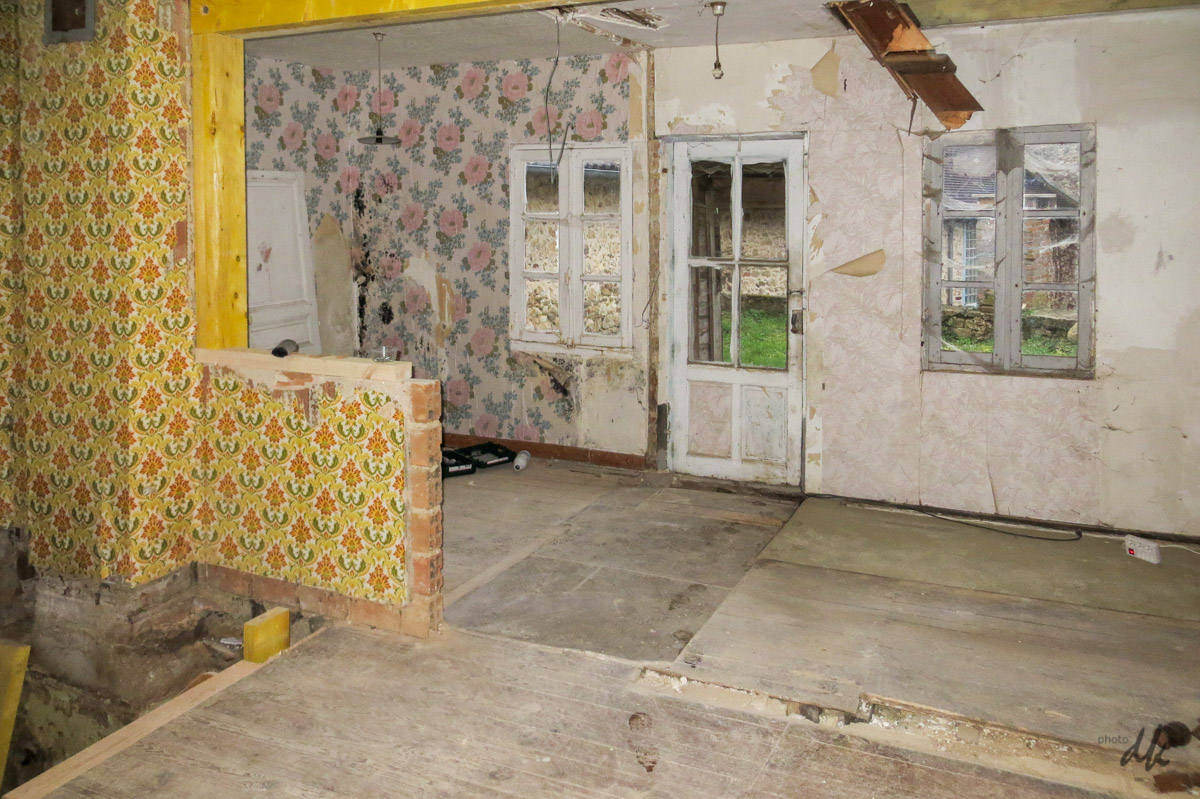 I've managed to remove most of the handrail and the spindles without too much damage, so will re-use the handrail. Not sure what to do with the spindles - cant bear to dump them - it seems to be all in mahogany.

I've been lazy about keeping this site up to date, quite a lot of work has been done but nothing documented...

So, here is an update showing the state of play at the end of 2018. 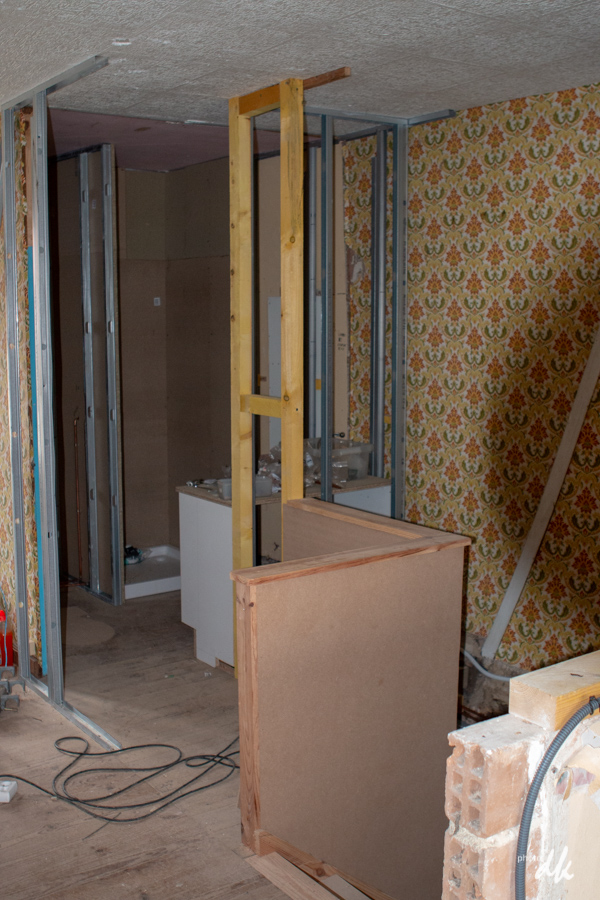 The shower tray is in place and ready for tiling to start. 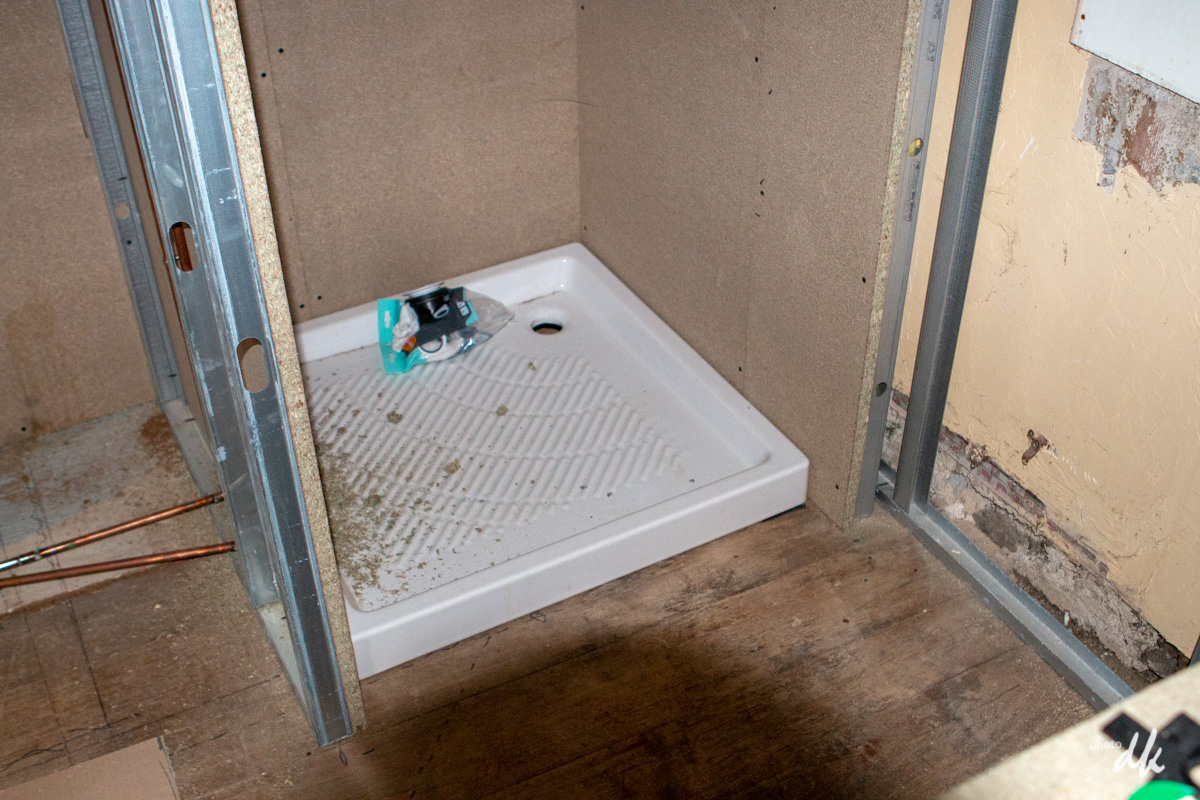 All plumbing is complete up to fittings for flexis which will be added once the various sinks and taps etc have been installed.

Waste plumbing is also complete except for the toilet. 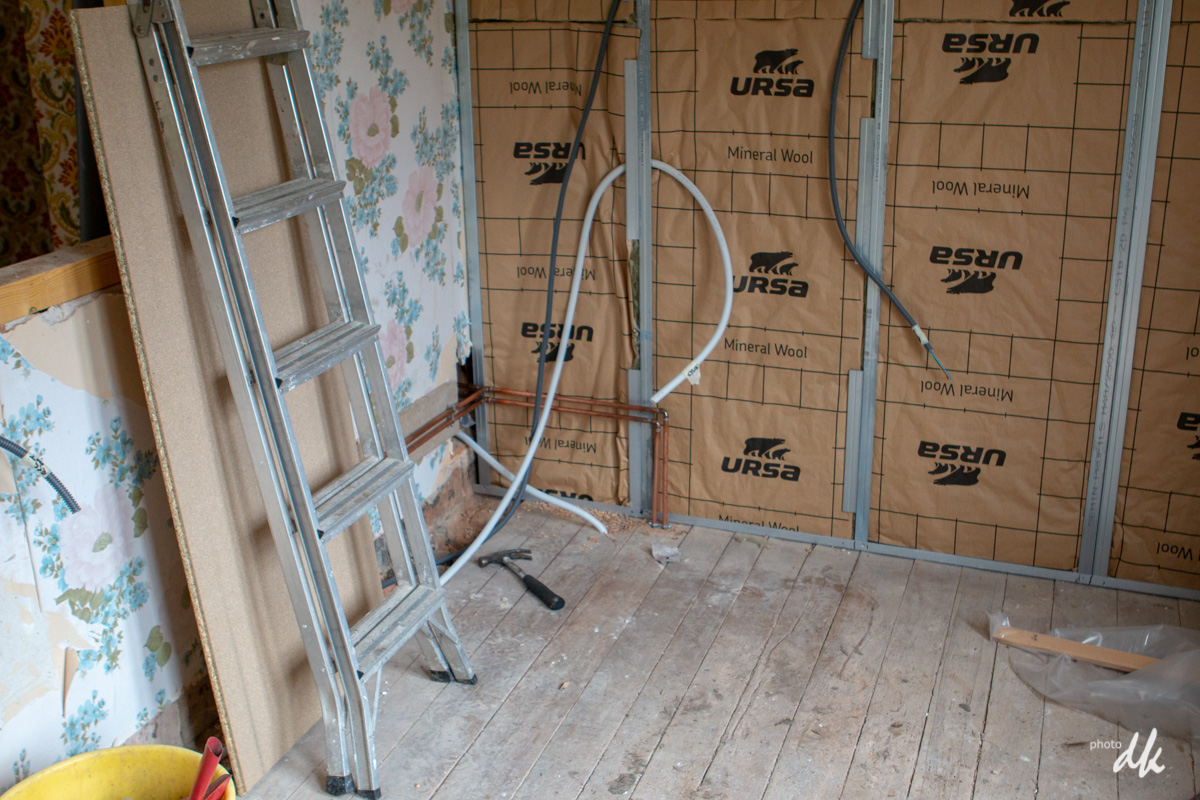 The dry liner for the kitchen has been started and one wall insulated ready for plaster board.  The first few electrical cables have also been installed.

The replacement window for the south wall is mainly finished, but still in the workshop awaiting final fitting of the opening lights. 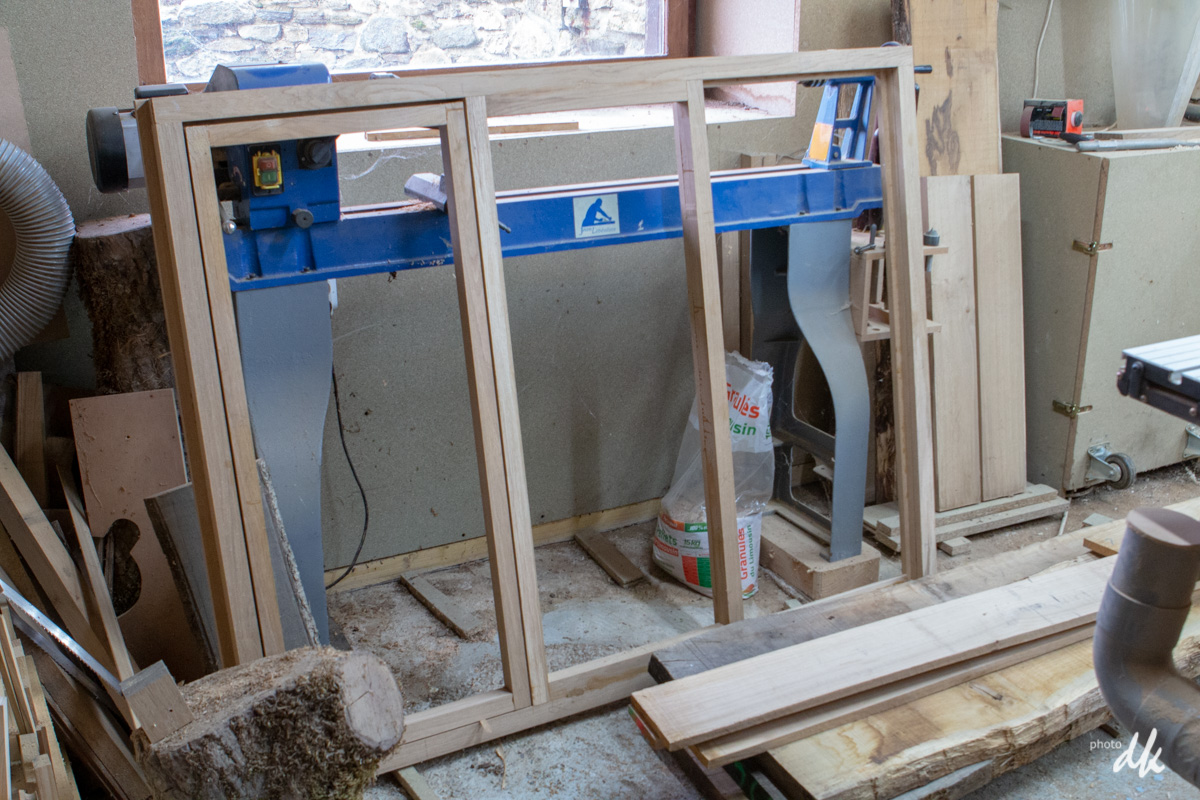 One of these is shown here in glue-up. 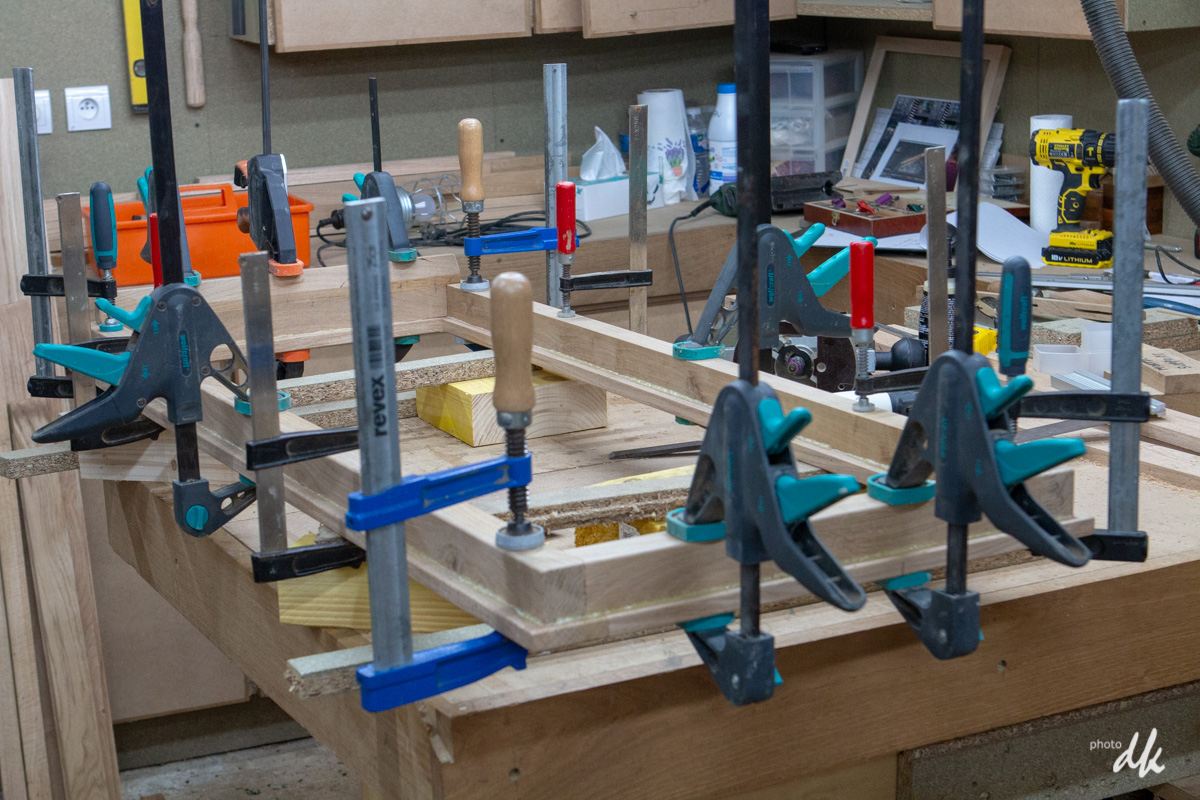 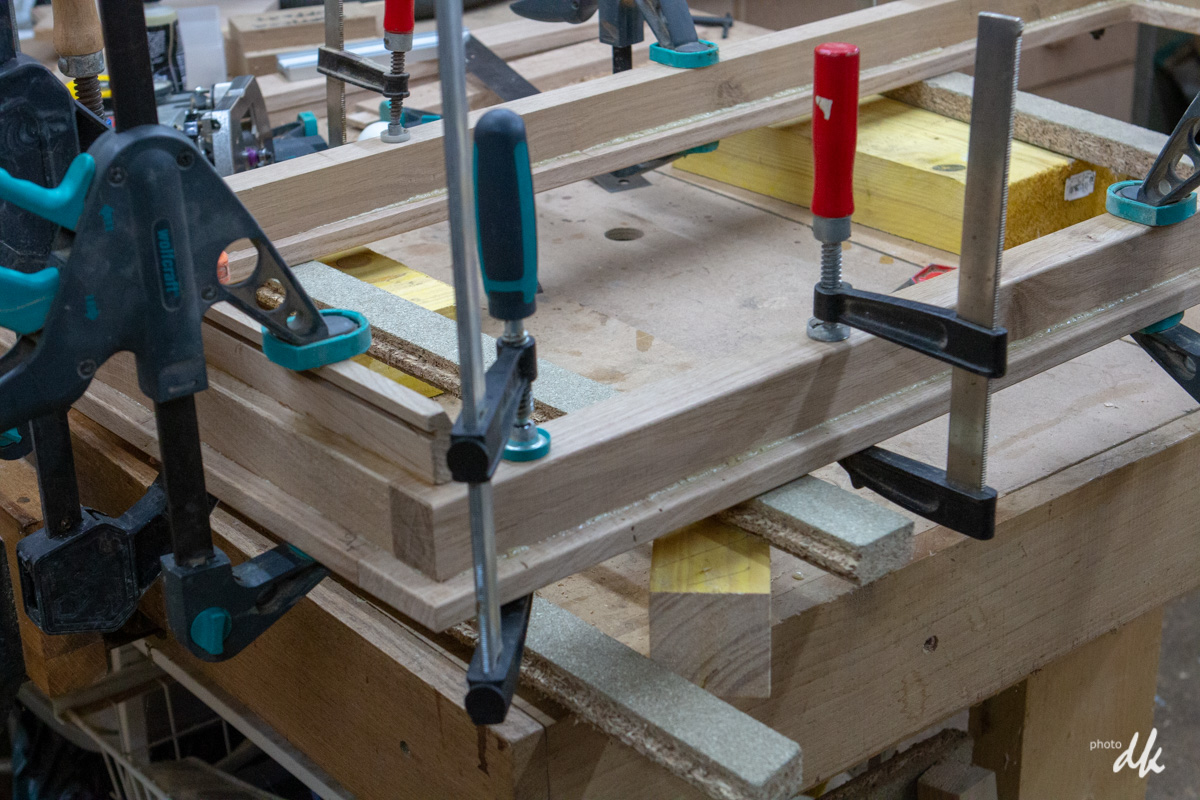