It's a folding step stool to allow LOML to reach the top cupboard in our living room. She is 5' 8" tall, but the cupboard is floor to ceiling...

All joints except the bridle joints at the tops of the legs are wedged M&T. The quarter sawn board I had set aside for the tops turned out to be wee bit smaller than I thought and so as not to mix grain, I turned a problem into a feature and fitted small sections with spaces between and so managed to make both tops from the one board. The inner section is hinged by the bolts you can see and there is a stop inside one of the larger section's legs to hold it when folded so that you can lift the whole thing without the inner section dropping through.

I'm reasonably pleased with the joinery, but very disappointed with the finish. I used a spirit stain as I didnt fancy sanding back raised grain on such a fiddly assembly if I used a water based stain. It dried so fast that try as I did, I could not get round fast enough to avoid "second coat effect" here and there. It doesnt really matter for a utility piece, but I know it is not up to standard. Danish oil next time perhaps ? 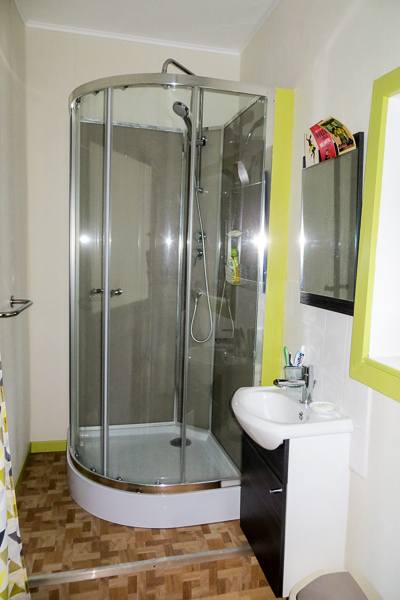 The early part of 2014 was taken up mainly with the workshop and getting some sort of garden organised, but I did fit in one project : a shower room for the double guest room.  The second large bedroom on the first floor at Rue-Darnet had a walk-in wardrobe the full length of the back wall, it was crying out to be turned into a shower room, it even has window - so that's what we did.  Unfortunately, I failed totally to take any WIP photos, but here are a few of the finshed job. Difficult to photograph as you cant really get far enough away from it...

I used a proprietary shower cubicle : looks good and is intrinsically water tight, but it was a bitch to install, the plumbing fittings provided were mainly plastic and very poor quality - I ended up replacing most of it. 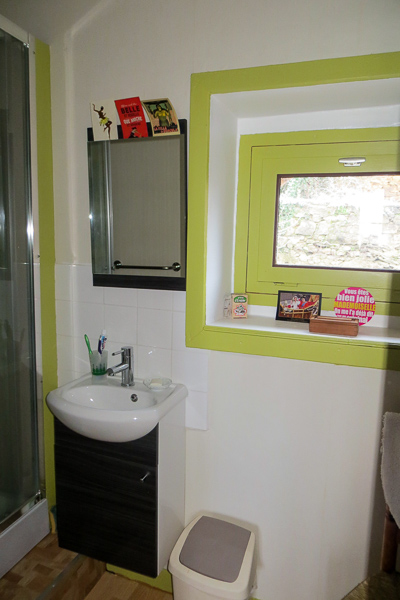 The main difficulty was the drains.  The room is at the SW corner of the house, the opposite end to the main bathroom on the north end.  There was no way to run a drain between the two on the first floor because of the stairs in the middle, so the drain had to go down through the dining room, along the sides of the cellar and so join the main outlet to the sewer in the NE corner of the house.  A run of over 30m.  Of course, 30m of pipe with an appropriate drop ended up below the level of the sewer connection, so we had to use a pump to raise it back to the appropriate level.  I installed one of the easily available toilet macerator/pumps just by the sewer outlet in the cellar and it works fine.

Water was not a problem as the pipes from the boiler in the barn pass under the floor of the room in question, I just tapped into them and fitted isolating valves as a precaution.

The other end of the room remains a walk-in wardrobe : hanging rail and shelf.

The kitchen at Rue-Darnet was quite well fitted, but lacked working space, however, the was an old cast iron sink in the depth of the wall under the window that had been kept by the previous owner as it is one of the last 18th C traces in the house.  I decided I would have to use the space.  However, the sink is still there, it's just under the new installation for future generations to find ! 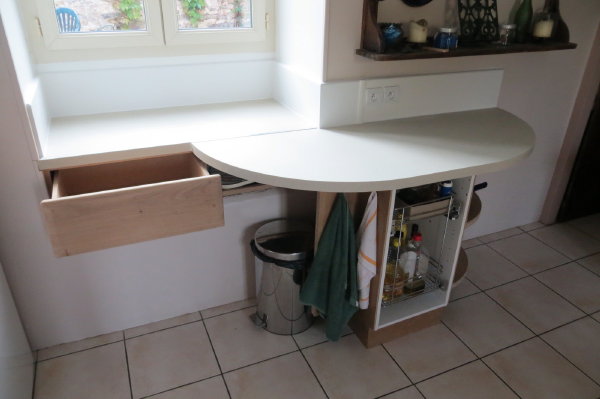 We settled on a curved worktop with a store cupboard and shelves underneath, plus a drawer for kitchen weapons in the thickness of the wall above the old sink.  Here it is installed, but awaiting the door. Cutting the curve on the worktop was interesting - needing to keep the laminate from chipping while achieving a good enough edge to take the edge banding.  I cut it with the bandsaw a tad oversize, then used the router on a trammel to clean it up. The wall is not tiled in this part of the kitchen and since matching the existing 10 year old tiles was likely to be a no-go, I decided to fit a white laminate upstand to protect the wall and added a couple of power points for the mixer etc.

The job was finished with a door made to match the existing ones in the kitchen : oak frame M&T with a raised panel in oak, stained to match then clear polyurethane to protect it.