Mainly because it is our address, but in fact most towns in this area have a rue Darnet.

Jean-Baptiste Darnet was a surgeon living in St Yrieix la Perche (87500) in the mid 1700's and it was he who discovered deposits of Kaolin, the key ingredient of porcelaine, in and around St Yrieix in 1767. This was the start of the world-famous Limoges porcelaine industry.

Initially claimed by the crown as a royal monopoly, the mines and porcelaine manufacture restarted after the revolution and, by 1807, there were 5 factories and some 200 employees. By the mid 1800's this had grown to 30 factories with world-wide exports. 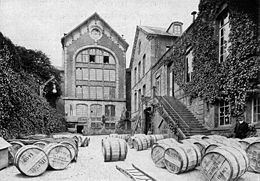